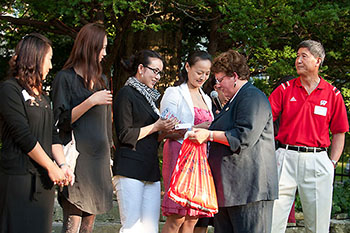 Andrew A. “Sandy” Wilcox, president emeritus of the University of Wisconsin Foundation, is part of a faculty and staff delegation joining UW-Madison Chancellor Biddy Martin on a visit to Greater China, with stops in Beijing, Hong Kong and Taipei.

The group departed Monday on the “return visit,” following Martin’s successful spring trip to Beijing, Tianjin, Hangzhou and Shanghai. Enhancing academic collaborations and raising the University’s public profile in Asia continue to be major goals, but the upcoming trip has a special emphasis on economic development.

The November trip has several major events scheduled in each city. In Beijing, Martin will meet with Chinese Vice Minister of Education Hao Ping and several major Wisconsin corporations doing business in China, while also addressing the Beijing Forum.

She also will visit Beijing Sport University to provide an update on the Chinese Olympians studying in Madison. In Hong Kong, she will meet with UW-Madison alumni and visit the Hong Kong University of Science and Technology and Hong Kong Baptist University.

The chancellor will receive a major artistic gift of 30 35mm prints of Taiwanese feature films, which will tour the U.S. and eventually be shown at the Wisconsin Film Festival. The collection will reside at the Wisconsin Center for Film and Theater Research.

In addition to outreach to the Chinese people and media, Martin hopes to keep the campus community updated on the progress trip via her Facebook and Twitter accounts, along with a Twitter account specially focusing on the trip, @UWChina.

Other members of Martin’s delegation include administrators Gilles Bousquet, vice provost for globalization and dean of the Division of International Studies; Paul Peercy, dean of the College of Engineering; and Paula Bonner, president and CEO of the Wisconsin Alumni Association.